For many years, pet stores have served as the primary distribution channel for substandard breeders to sell puppies, contributing to the overpopulation of pets in the homeless system, as well as the high euthanasia rates in shelters.

Following a two year campaign with the City of Ottawa, PAWS,  together with a broad coalition of partners and supporters,  successfully legislated against the selling of cats and dogs in Ottawa pet stores. In 2021, a bylaw, banning the sale of puppies and kittens in pet stores, will come into effect, adding to the following other Ontario cities:

We fully support the many pet stores that embrace a humane business model.  These stores work collaboratively with local rescue groups and shelters.

Our Contribution to Animals

We know all to well the cost of helping animals in need….. that’s why we donate some of our own fundraising money to groups and organizations that work directly hands on with animals.  One way we do this is by collecting empty beer cans, wine and liquor bottles, and donating the proceeds.

In 2018, our amazing network of friends, family, neighbours, and sometimes complete strangers, helped us raise a total of $4500.00, all of which was distributed to help pay for vet bills or costs related to caring for animals.

If you would like to donate your empties, please send us an e-mail to arrange drop off or pick up. 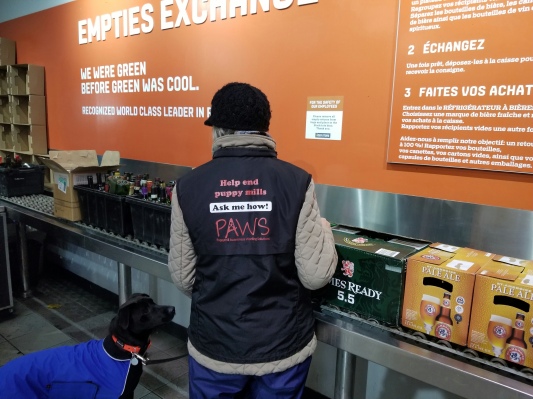